Joseph Stannah founded the business back in 1867, providing cranes and hoists for the docks of a developing London. A lot has happened since then, today Stannah is a British family-run global business.

The Stannah company has a turnover in excess of £260M, employing over 2000 people working in the UK and elsewhere. Fifth-generation members of the Stannah family manage the company and still uphold the traditional family values of quality and service that Joseph started all those years ago.

150 years of Stannah: a short history

Back in the beginning…

The Stannah business was founded in London by Joseph Stannah in 1867. Joseph Stannah was the son of Samuel Stannah, a linen merchant in Worcester. An accomplished engineer, Joseph started the Stannah business in Southwark, London, providing cranes and hoists to unload cargo in the docks. He turned his hand to numerous problems and accumulated a raft of patents throughout his career. Among his designs for cranes and hoists are drawings for stuffing boxes, locomotives, pendulum pumps and there is even a tantalising reference to him having designed a car although we can find no firm confirmation of that.

However, we do know for certain that Joseph knew a thing or two about creating a public profile and was a regular contributor to the publication ‘The Engineer’, writing letters and publishing information about his patent devices.

Joseph’s son Albert took over the business around the turn of the 20th century, by which time the business had started to diversify into passenger and goods lifts and even car lifts.

Joseph and Albert continued marketing their products and they placed numerous adverts in building catalogues in the pre-war period.

Next in line was Leslie Stannah, also known as Pop, father to Brian and Alan, and grandfather to Jon, Patrick, Nick, Alastair and Helen. Born in 1901 to Albert Stannah and his wife Edith, he was a genuine character, known for his discipline on the one hand but real concern and kindness to his staff on the other. It was Pop who essentially rebuilt the Stannah business from scratch after the devastation of the Second World War.

As a young man Pop was an avid motorcycle enthusiast, retained by the iconic British motorcycle firm Ariel as a competitive rider and he won many events while riding for them. Pop didn’t join the family business on leaving education but went to work for other lift companies to gain experience. In fact, he still hadn’t joined the family firm by the outbreak of war in 1939 when he joined the Royal Navy.

After commendable service in the Royal Navy Pop returned to London and to the ruins of the Stannah factory which had been hit by a bomb. By this time his father AJ was 77 and the business had ceased trading. With his demob suit, £300 and a bombsite where once a factory had stood, Leslie set out to rebuild the business. With incredible determination Pop started small and grew the business, manufacturing as many components of his lifts as possible. By the 1950s the business was on firm foundations and Brian and Alan were taking up apprenticeships in the industry ready for their ultimate entry into the business. Pop retired from the business in the 1960s and died at the age of 77 in 1979.

Those firm business foundations were starting to show cracks when Brian joined the business in 1958 and by 1961 the bailiffs were making visits to the factory. With some real determination, Brian set about restructuring the business and now formed a base around the more regular income from service contracts, providing a cushion for the more volatile supply and fit the business. 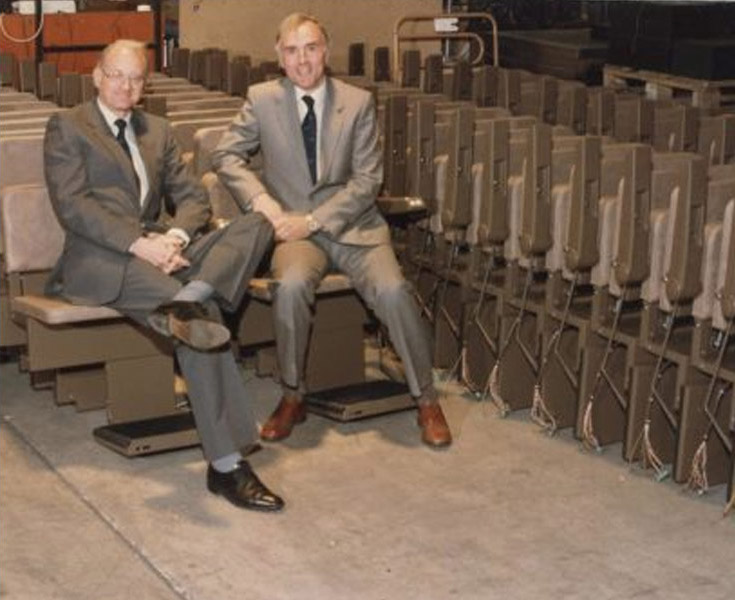 While Brian managed business affairs, Alan oversaw all things engineering. Alan recognised that in order to thrive, the business had to streamline production and look at standardising products. This would cut costs, allow for the outsourcing of certain components and offer shorter lead times while still allowing for bespoke production where required. Alan’s work resulted in the launch of the Maxilift in the 1960s, introducing a product line that has been central to the success of the Lifts business.

The early 70s were a tough time for everyone with a biting recession and fuel crisis leading to three-day working weeks. Brian and Alan were always open to new opportunities to develop the business but one very successful diversification, our Microlifts business, almost didn’t happen. At the time the brothers considered service lifts rather troublesome and when they received a letter from a company called Daldoss promoting a product that could be installed in just a day they rather dismissively tossed it into the wastepaper bin. Later that day, Alan having had second thoughts, they retrieved the  letter from the bin and that was the first step in a long and fruitful relationship. To this day we are the sole distributor of Daldoss Microlifts in the UK and our Microlifts division continues to enjoy solid sales.

The business was also selling a number of domestic homelifts at the time but unfortunately, the product wasn’t suitable for many homes. Brian, however, was still receiving enquiries from home owners looking for a solution to getting upstairs. He was determined to find a way to give his customers what they wanted and to survive the recession, so off he went to Holland to visit a stairlift company called Jan Harmer with the intention of learning more about their product. Brian ended up with more than he had planned when he purchased the company’s designs.

On his return, Brian and brother Alan together produced prototypes of their first Stannah stairlift. From their London base the two brothers and a few colleagues began to manufacture the stairlifts at the start of 1975 and by December had sold 66 units. Production was difficult and in the early days, it seemed that they were having to take stairlifts out for repair as quickly as they put them in. However, Brian and Alan persevered, improving product design and fabrication techniques to deliver a more reliable product. Stairlift production quickly moved to Andover, where Brian and Alan were already building a new factory to house their expanding lift business and where it has flourished over the last 40 years. Today Stannah have manufactured well over 750,000 stairlifts.

A stairlift was quite a new concept in the 1970s and so Stannah were not just trying to sell a new product but more selling an innovative alternative to single storey living in retirement. In printed advertising, the product was endorsed by Professor Heinz Wolff and Dr Christian Barnard, well-respected pioneers of life-changing work in science and medicine.

Growth in lifts and stairlifts was steady throughout the 70s. As sales grew the ability to provide after-sales service to all their customers prompted the beginning of today’s service branch network, beginning in Manchester, Birmingham and London. Production grew. The principal factories were in Andover, Hampshire but a second rail manufacturing centre was set up in Dunston, Newcastle in the 1980s where Stannah bought R J Shaw and Company and found that the skills sets in the North East were invaluable in their growth plan and latterly introduced the production of platform lifts into their expanding Andover sites.

In 1979 the first stairlift exports were made to Germany, to Lifta, who are still the Stannah sole distributor in that country. Today our stairlifts are sold in over 40 countries, through more than 30 distributors and 9 wholly-owned subsidiaries.

Today most people know us for our stairlifts but many of us will, perhaps unknowingly, come into contact with Stannah products on a regulars basis: it could be taking a Stannah supplied and maintained escalator from a train platform to a concourse, the bacon roll brought to you from a basement kitchen by a Stannah service lift, or the goods you browse in your favourite fashion store that have been transported from the warehouse to the shop floor in a Stannah goods lift. The diverse range of products Stannah now offers encompasses passenger lifts, platform lifts, goods and service lifts, escalators, moving walkways, homelifts and stairlifts, alongside providing maintenance and repair services for all makes and models of lifts and stairlifts. Brian and Alan are still very much involved in the business as co-chairmen, but in the late 1980s handed over the reins of the day-to-day activities. Today all five members of the fifth generation – Jon, Patrick, Nick, Alastair and Helen – are active in running the business, maintaining the family traditions and ethos.